If you’re reading this, you know that for the most part, we survived the first pass of Uranus square Pluto relatively in tact. I know some of you out there were a little worried… While many headlines last week had a distinctly Uranus square Pluto signature (we’ll look at a couple below), it’s times like this that remind us that our fears sometimes get the best of us. And also that the world keeps on turning. There were some dramatic headlines last week. Sadly, the fires in Colorado are being dubbed “the most destructive in state history.” The supreme court let out a couple of very Pluto in Capricorn style decisions. And the Egyptian elections carried the flavor of both the Uranus in Aries and Pluto in Capricorn archetypal fields. They elected an Islamist president who pleases the conservatives. But in a surprising (Uranus, anyone?) turn, the new president announced that he’ll appoint two vice presidents: a woman, and a Christian! The real-life expression of the planetary energies is always more wonderfully complex than we could have imagined beforehand.

The presence of Neptune in Pisces was felt in the beautiful “Pray for Colorado” campaign that circulated the internet rapidly upon news of the spreading fires. Sadly, some scoffed at the idea. After I posted the graphic on my Facebook page, one “friend” commented that prayer is a waste of time and that what we really need are changes in politics. We surely need some of the changes he’s alluding to, but you and I know that the power of prayer is real and wholly worth our efforts. We have Neptune to thank for reminding us of that and uniting us in such a vision. And thanks also to that very Uranian, lightning-fast information pipeline that helps spread the word and connect us quicker than ever. It does seem that this time around, the revolution will not only be televised, but that spirit will have a marked presence as well.

In other news, we’re having a big Audio Download Sale in the store on select titles, including a few titles exclusively available to past or present AP students.

With good wishes for your well-being and happiness always,

The United Astrology Conference in New Orleans (UAC) in May was a zoo for me, as I expected. It’s good to have a gathering of the tribes, but playing the “famous astrologer” role in a crowd of 1200gets very exhausting. My classes went well and I enjoyed playing at least one role — that of a gay Albert Einstein meeting an equally gay Isaac Newton (played by UK astrologer, Andrew Morton) in Michael Lutin’s terrific show, “Maybe The Mayans Were Right.”

Otherwise, for me the high point of the conference was the chance to sit down with Gisele Terry and David Cochrane to talk about the current conditions in the astrological community. Videographer Kelly Phipps shot the conversation with a single camera as the three of us sat around a table in Gisele’s room. You can watch it now on YouTube.

Gisele is a psychotherapist in California as well as being the current president of ISAR. David is a past president of ISAR and currently runs the Avalon School of Astrology in Florida. I like and respect both of them very much. Harmony reigned, but we all have very different viewpoints about what’s important in astrology. David is very much oriented to finding statistical support for astrology. Like David, Gisele is academically-disposed, although more clinical and less numerical. I suppose I played the part of the Wild Man From Borneo, in that I am not very optimistic about astrology and academia being reconciled anytime soon.

The conversation was a pleasant one in that it never really veered into debate, nor was there a speck of vitriol or even disrespect among us. Instead, we danced around each other’s positions, poking a bit, but generally willing to learn from each other. Too often, different schools of thought in astrology become emotionally antagonistic. It was a pleasure to sit with two of my colleagues who were wise and mature enough to avoid that, humble enough to learn and grow, and kind enough to listen and share. 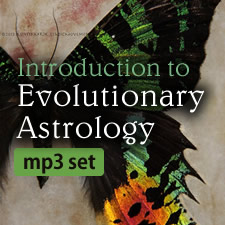 In Evolutionary Astrology, the focus is on the potentials described by the chart - both high and low. You learn what it looks like when the symbols are being actualized to their highest potential, and what it looks like when things have taken a turn in the other direction. Ultimately this system seeks to empower the user, whether that's you, your clients, or your friends. This workshop will give you the tools to take the first steps in that direction.