The quincunx aspect in astrology—two planets separated by 150 degrees; one sign more than a trine, one less than an opposition—what does it signify? It is usually called a minor aspect, but many astrologers argue for its power. Throughout the month of July, we will all have a window on assessing the strength of this configuration. Saturn will spend the entire month in the 17th degree of Scorpio while Uranus will spend the month in the 17th degree of Aries. That geometry provides a classic experience of this aspect. Everyone one of us will be feeling it.

In this newsletter, let’s use the month-long dance between these two heavyweight planets as our laboratory as we absorb the first principles that underlie this often-misunderstood astrological aspect.

Quincunx—go ahead, admit it. It’s fun just to say it. But be careful. There’s a tendency to pronounce it as “quin” followed by “cunx.” But “quinc” then “unx” is more accurate. Those are the Latin words, more or less, for the numbers five and twelve. And astrologically, the quincunx represents 5/12s of the zodiac. The original quincunx, by the way, was a Roman coin, back in the 3rd century B.C. It’s value was 5/12s of the standard Roman dollar of the day—so, quinque and uncia are actually the roots of the term.

So what is the feeling of a quincunx aspect between two planets? Here is a way to think of it using Capricorn and Gemini, which are in quincunx with each other: 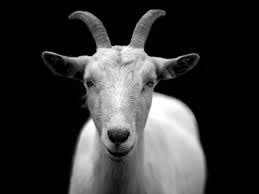 I am a Capricorn so I like to think I think in an orderly, systematic fashion. Maybe I am launched in conversation, busy developing a complex and eminently rational point for the benefit of one of my Gemini friends, whom I have cornered. Perhaps I am expounding upon the parallels between Heisenberg’s Uncertainty Principle and the transits of the planet Uranus. My Gemini friend appears to be paying me enraptured attention. But suddenly she blurts out that my nose reminds her of the nose of someone she once knew in high school—someone who had a weird orange cat named Werner that got lost for six weeks then came meowing back at his door, skinny, but with this mysterious pink ribbon around his neck, and both the cat and the Gemini woman’s friend were Capricorns, she thinks…although maybe the cat was an Aquarian…

What is a good Capricorn to do? Strangulation crosses my mind, as does bleak despair. Is she not listening? Am I boring? Does she suffer from ADD? Am I too pedantic?

Then she mentions that her friend with the cat later became a veterinarian. And I realize what she has done. She was listening to me carefully, but thinking in Gemini fashion. The look of my nose led her to the memory of the high school friend and how the “random event” of the cat’s misadventure had deepened her friend’s fascination with animals and led to his career choice. She had deftly brought in synchronicity, animal magic, and miraculous Uranian improbabilities, whose meaning we only understand much later. As a good Gemini, she had allowed her mind to slip into free-association, knowing that she was probably onto something if she would just let it jam for a while.

And she was right. It’s not exactly a linear, logical track, but it works. That’s Gemini. No one would mistake that for how pure Capricorn thinks.

In other words, my Gemini friend understood me perfectly and was following my point. But our minds worked in utterly different ways. And perhaps together our joint intelligence was operating at a more integrative level than either of us could attain alone.

There’s the quincunx in action. Two perspectives, two methods, two sets of values, completely widdershins to each other, and yet stronger together than they ever could be on their own. To get it right, each must stretch and adjust to accommodate the sheer alien weirdness of the other one. Reaching that point of catalytic partnership, enormous creativity is unleashed. There is a breadth and subtlety of perception. And there is a tremendous mutual fascination.

Meanwhile, if they fail to stretch and adjust, they only manage to drive each other crazy. Mutual frustration arises. Each one simply misses the point which the other one represents. Quincunxes can be very annoying.

My illustration reflected the natural quincunx between Capricorn and Gemini. You can put the quincunx into the marrow of your bones by similarly thinking of Aquarius and Cancer trying to communicate, or Sagittarius and Taurus or any of the other quincunx pairings. Think of how they can simply miss each other in expressing themselves—and think too about how the blind spots of each can be opened up and illuminated if they make the effort to really listen to each other.

An under-reported piece of astrological lore is the great prevalence of quincunx-based relationships. That shouldn’t be a big surprise based on what we’ve seen so far, but it is another subject and beyond the scope of this newsletter. Astrologer Amanda Owen has done some wonderful work in that area.

Both Saturn and Uranus make stations during July. Saturn turns direct on the 20th in 16°39′ Scorpio, while Uranus turns retrograde the next day at 16°31′ Aries. As planets approach stations, they naturally slow down. The effect is that, while July 20th and 21st do represent a serious peak in the effects of this quincunx, it will be strongly in effect all month. Both planets remain within those same degrees throughout the entire period—something which is unlikely to happen unless stations are involved.

So what is the current argument between Saturn and Uranus? And what does it look like if they can each see the other one’s point of view? Our task as humans is to aim for that higher ground. The meaning of this quincunx is collective—everyone is affected—but it is also very personal. It is an argument that will be going on both in the headlines and between your ears. In your own psyche, your wise self is the referee. And your foolish self will be fueling the fire of one of those planets, trying to make it silence the voice of the other one.

Let’s look at the two planets individually, then put them in the ring together.

There is a natural, archetypal tension between conservative Saturn and experimental Uranus. This July, it takes on a particular face, based on the signs they occupy as well as upon their own natures.

Saturn is serious, persistent, and patient. Scorpio is about deep, honest inner work. Put them together and the question is, what are you not facing in your life? Can you take a pensive, honestly self-critical breath before you act on a dark impulse? Can you consider that you might be wrong? Can you see that in your interpersonal dramas, half the time you have been targeting symbols in your own head? Can you hold back and just be reflective for a while? Can you be like the wise old karate master and remember that the best karate move is often simply to walk away?

These are Saturn-in-Scorpio wisdoms. You’ve been offered a chance to claim them since October 2012 when Saturn entered that sign.
The intensity of this process, its level of relevance to you, and its exact areas of operation depend on what house of your natal chart transiting Saturn currently occupies and what aspects it is making, but the basic principles fit all of humanity right now, you included.

Uranus is wild, audacious, and bold. Ditto, Aries. And Uranus first entered Aries in May, 2010. The combination is volatile and explosive, but also potentially groundbreaking. Sometimes you just need to take risks. Sometimes you’ve got to fight to be free. Tyrannies—in our lives and in our heads—need to be overthrown. We all agree that being true to one’s self is a good thing—but how much are you actually willing to pay for it? What gambles will you tolerate in order to preserve it? Is it worth as much to you as your money? Is it worth as much to you as what the rest of the monkeys think of you? How much does your soul pay for you to look cool? Or important? Or sexy? Can you face the scary powers that threaten to bribe you or threaten you into becoming a puppet or a slave?

In the face of all that, are you brave enough to say, roll the dice?

Somewhere in your chart (and in your life!) Uranus is asking you to trust your fiercest, wildest rebel impulses.

And somewhere Saturn is saying almost exactly the opposite. The key word in that sentence is “somewhere.” Looking through the clear lens of astrology into your individual chart, we can sort all that out specifically via houses, aspects, and so on. Saturn has its place as does Uranus, and they are different places. That is all specific to your chart. But there are a few general principles that apply to us all.          Specifically, Saturn-in-Scorpio cautions us that unconscious factors—old wounds, fears, and humiliations—need to be faced squarely and incisively before we get on our high horse and start arranging firing squads, SWAT teams, and Predator drones. And Uranus-in-Aries tells us that once we have done that Scorpionic housecleaning, it is time for bold, decisive action. Time to roll those dice.

The two factors, each one so different from the other, are like corrective lenses for each other. They can really help each other. They are stronger and wiser together than they are alone. But they also tend to misunderstand each other. Just like me when faced with that Gemini person free-associating from my nose to her friend’s cat, each one might under-estimate the other. Each one might not see the wisdom in the other one’s position.

To Uranus, Saturn can seem fearful, stodgy, and too cautious. To Saturn, Uranus can seem immature, reckless, and too violent or extreme. These two voices can dismiss each other. And in the ensuing polarization, a weird alchemy occurs:  each one actually becomes “right” about the other—Saturn does become crippled with caution and Uranus does become a loose cannon. Meanwhile, the ship of higher possibility slips slowly beneath the waves of shared deafness, projection, and misunderstanding.

It is all about finding the sweet spot of optimal integration between two very distinct energies. That’s the quincunx aspect in a nutshell.

As always, if you get this right in your own life, you are simultaneous adding a supportive vibration to the collective consciousness of world culture. That sounds rather grand, but it is how the universe actually operates. Humanity, too, faces the same quincunx—the same choices and possibilities. So, fundamental to the integrated cosmology that underlies evolutionary astrology is this realization that just as we are not powerless in our own lives, we are not powerless in the face of the collective human journey. It is us and we are it. What we do individually resonates upward through the collective harmonics of all earthly life.

So, in nutshell, it is time to listen to both sides of the argument in your head. Integrate the best and leave the rest.

FREE Audio Release from the Archives 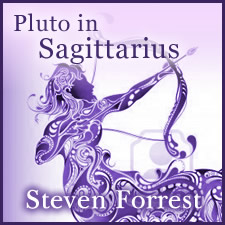 Pluto in Sagittarius: The Anarchist, The Crusader & The Truth Seeker

We are pleased to share an archival recording of a 1994 lecture with Steven on the ingress of Pluto into Sagittarius. 1 hr. 47 min.