Hellfire and brimstone? Economic collapse? Nuclear explosions? Or is it the arrival of Elvis and Sasquatch in a UFO to change our DNA and lead us all in chanting for world peace? April 2014 promises all of it . . . depending on which astrologer you read.

Astrologers tend to be a rather hysterical crowd sometimes. I’m 65 and I have lost count of the number of demi-apocalypses I have survived. One thing I’ve learned well, the hard way is that “postdiction” is easier than prediction. “I could have told you that . . .”

The reality, as I have come to understand it, is that the future is not fixed, and that therefore it cannot be reliably predicted. Consciousness interacts with vast archetypal fields of possibility and probability. What actually happens is the result of the collision of both forces.

Consciousness and intention are too powerful to discount, and our duty as astrologers is, I believe, to fan the flames of mindfulness and kindness rather than to feed fear and to spread feelings of helpless fatalism.

So that’s my sermon.

But April 2014 looms, and it looks incendiary. All month long we have a grand cross in the sky. Pluto and Uranus are square, as most of us know, from 2012 through 2015. But during April, Mars opposes Uranus, while Jupiter opposes Pluto. The four-pointed configuration reaches its most precise geometry around April 22, but it is very strong all through the month. 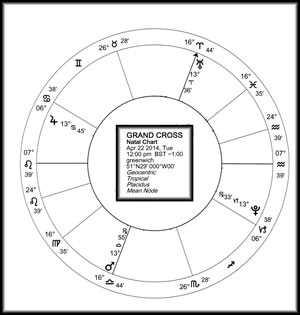 Four squares or two oppositions—these are the so-called “bad aspects.” And who’s fighting? Well . . . that’s not very encouraging either. Uranus, the Lord of Earthquakes and Lightning Bolts is squared off against Pluto, the Lord of the Underworld, while Mars, the God of War opposes Uranus and squares Pluto. Jupiter is often viewed as a bright spot, but in this kind of neighborhood, even “the Greater Benefic” has its work cut out.

Is there any hope for us?

I think so. But I don’t want to whitewash this configuration. Astrologically, it looks about as comforting as sighting a great funnel of dark cloud outside your window while wondering why you suddenly hear something like a railroad train. With squares and oppositions, things tend to come to a head. Push comes to shove. Breaking points are reached. Crisis reigns. Squares and oppositions are exactly like the sound your engine eventually makes when you’ve decided to ignore the little red oil light on your dashboard. And the reasons are exactly the same: at squares and oppositions, bad behavior catches up with us. The law of consequences reigns.

How has humanity been doing lately? I think we will see something like our “report card” this month. I don’t want to overreact, but I doubt it will be smooth sailing. There is a high probability of drama—and trauma. That’s a statement about the planet, a statement about the 6 o’clock news. Political and social frustrations will boil over. Some systemic breakdowns will occur. I wouldn’t be surprised if the earth itself offers up some complaints in the form of earthquakes, storms, volcanic activity, and so on. If you have astrological sensitivities to the middle of the Cardinal signs—Aries, Cancer, Libra, and Capricorn—issues will come to a boil in your own personal life too. What issues? Much there depends on the specific Houses of your chart that are being affected and the aspects those four planets are making to it by transit.

The heart of this grand cross is the ongoing square of Pluto and Uranus, about which I have spoken here in the past. If you need a refresher, check out this free video. The basic issue with that big, long-lasting square is summarized in the words, “breakthrough or breakdown.” Seemingly irresolvable tensions reach critical mass. Something has to give, something has to evolve and change. The longer we wait, the more explosive the tensions become.

Jupiter, in Cancer, entered the equation last summer, so it’s not exactly a new player.

We’ve been living with a T-square among Jupiter, Pluto and Uranus since then. Mars is the new element, and of course, what itchier trigger-finger is there than the God of War?  But do keep perspective: the same Grand Cross, although not quite as precise in its geometry, was in effect in late December 2013. We survived that one.

Mars advanced through Libra nearly to the end of the sign—and out of the orbs of the grand cross—until March 1, when it turned retrograde. Now it is heading back into the cross hairs. The full four-sided configuration reaches its height of precision—and presumably of intensity—on April 22, with Mars still retrograde.

Mars turns around on May 19 at about 9 degrees of Libra. That’s a day to mark too. Mars stations can bring things to a head just as surely as any exact aspect. With Mars advancing, the grand cross grows tighter again, but by the time Mars is back into its exact hard aspects with Uranus and Pluto, Jupiter has begun to move onward through Cancer, and the structure is breaking up.

That’s a long-winded paragraph! But the take-away is that it is misleading to think of this Grand Cross as something “happening on April 22.” The reality is that it peaks then, but it is “happening” from December 2013 through the end of this May. It is a period of months, not a single day-long event. Too long a time to spend under the bed!

How can we get it right?

Again, I’d refer you to previous deeper work I’ve done about the Pluto-Uranus square. It is essential to understanding the significance of all this, but I don’t want to repeat it all here. Let me just say that the “inner liberal” and the “inner conservative” in you need to shake hands so we can stop compartmentalizing ourselves and projecting so mercilessly onto each other. In this short article, I want to focus on Mars and Jupiter. They are what make this present situation unique. They turn the simple square into the complex, four-planet structure we call the grand cross. They also represent fresh, new energetic vectors in a very stuck situation, just like when someone whose voice has not been heard enters an argument that is going nowhere and brings some genuine new insights. Maybe we listen to that person, and maybe we don’t, but there is at least a fresh avenue of possibility.

Here we have an expansive, optimistic vibration connected with Cancerian concerns: home, family, land, the inner life. The subject is vast, but here’s one thread in the tapestry: I drive and fly around America quite a lot, and I’ve got to say the place is falling apart. The highways, the bridges, even the tray-tables on the big jets. Why? Why don’t people notice? What would it do for our economy and our relationships with each other as citizens if we acknowledged this and started re-building the place? Where is our pride (Jupiter) in our home (Cancer)? Because of synchronicity, we may well see evidence of this issue—a tragic bridge collapse, for example. This is just one meaning of Jupiter in Cancer, but it suggests a way of thinking that can add new dimensions to the current impasses, socially, culturally and politically.

While we’ve been fighting the place has fallen apart.

Cancer is about nutrition too. What’s happened to the food supply? Don’t we deserve better? Are we poisoning ourselves with pesticides and GMOs? Why are so many people suddenly “gluten intolerant?” Maybe it’s not the gluten at all. Maybe it’s what Monsanto, et al, have done to the wheat. Will the laws of synchronicity lead to some kind of miserable event that demonstrates this to us? A plague of diarrhea? Do we need that, or can we get the message in a healthier way?

At a more personal level, what about your own home? Does it need some paint? A garden?

What about your home in the more intimate sense of the word? Have I told you lately that I love you? Have you heard those words coming back at you lately? We all have families in one sense or another—and here I want count families of choice as well as the old shared-DNA- and/or-bodily-fluids model. Our roots require attention now. That’s Jupiter in Cancer! Get that kind of healing going, and many dilemmas are shattered. I spoke as an American a moment ago when I mentioned the infrastructure falling apart, but this applies to Damascus and Aleppo and Kiev and probably everywhere else too.

Mars is the big trigger in the mix. It is in Libra, the traditional sign of its “detriment.” I’ve never liked that word. Such a configuration just means that a planet is in a complex, paradoxical situation, sort of like being over sixteen years old. Can we fight (Mars) for peace (Libra)? Of course we can—and that is an excellent idea right now. There is obvious irony in the phrase, “fighting for peace,” but achieving peace takes effort and courage. I think of the courage it takes to disarm, for example. People who claim to be “realists” dismiss this idea as a folly tantamount to suicide “in this dangerous world.” But take a look this graph showing 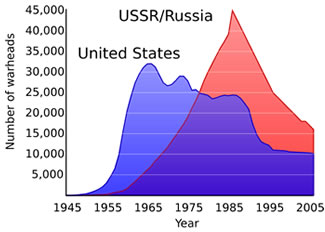 the rise and fall of the size of the nuclear stockpiles of America and the old USSR. (INSERT us-USSR nuclear graph). We did it once and we can do it again. We stood down. We faced our fear, and decided it was not doing us any good. The Soviets followed suit. We backed away from nuclear Armageddon. I call that practical, and I honor the courageous heroism of those who risked it. The most pressing and immediate issues today are perhaps not nuclear, but the principle is the same. We can do it again—collectively in the world, and individually in our own psyches.

How can you help? Try disarming at home. Try dropping defenses. Try “fighting for peace” in your own little world. Try making your community (Jupiter in Cancer) a place of reconciliation (Uranus integrated with Pluto). Be nice to somebody with a bad bumper sticker. Let them get ahead of you in traffic, and smile at them. This is how astrology—and the universe—actually works. As above, so below—and as below, so above. Your own consciousness is a force in the larger pattern of things.

What will happen this month? Crisis leading to breakthrough, with spiritual heroes making their voices heard? Or crisis making the rubble bounce some more?

It is not entirely out of your hands.

Join Steven’s Next Live Webinar on May 3

In this live webinar, Steven will explore the meaning of planets and signs connected with houses five, seven and eight. The emphasis will be on teaching the principles of interpretation, illustrated with many examples. Deep lifetime bonding, passing love affairs, emotional epiphanies and emotional disasters—how can we sort them out? Astrology can help! Houses Five, Seven, and Eight carry the DNA of each of these intimate patterns. Knowledge of the exact energies they represent in you can help you see through the hormonal fog.

FREE Audio Release from the Archives

We are pleased to share an archival recording of a 1997 workshop with Steven on the ingress of Neptune into Aquarius. Enjoy!