In the modern system of rulerships, Pluto rules my own Scorpio Ascendant from the ninth house and Leo. Thus it is the ruler of my chart, and has left a very obvious mark on the outward shape of my life: I travel all over the planet teaching metaphysics and often getting treated like a king. That sounds a lot like Leo and the ninth house to me.

Closer to the heart of my methods, Pluto also rules my Scorpio south node of the Moon, so I have also wrestled with Pluto’s dark side in this lifetime and in others. I wrote confessionally about some of that in the final chapter of Yesterday’s Sky.

Back in the early 1990s, with Pluto transiting over my Ascendant, my publisher commissioned me to add a volume to a series they were doing about each of the planets. The Book of Pluto was the result. After being unavailable for a year or two, I am delighted to see the book coming back into print this month. I knew while writing that the ideas it contained would create strong reactions in people—that is very much the definition of Pluto. Sitting with a client experiencing  a Plutonian time, I often say that, “if I am not making you uncomfortable, I am missing the point.” This is not about sadism! It is about the fact the during Plutonian times, material emerges from the world of the Shadow. It does so because we are ready—sometimes just barely ready.

The Book of Pluto Explore perhaps the most mysterious planet. Learn how your Plutonian wounds, once acknowledged, might become your most energizing strengths. Covers natal Pluto by sign, house, aspect, transits and progressions. Gutsy writing that unflinchingly looks the Dark in the face, but we think you'll come away from it inspired.

All that material is in the book. I can’t resist the urge to write, “Buy it if you dare!” We must laugh with Pluto. Otherwise the crying can be unbearable. So there is laughter in the book too, along with the profoundest basis for hope that humanity has, which is our ability to tranform ourselves with courage and honesty. We are bigger than our wounds. Our faith can eat the most frightening nightmares.

Of course we need not fear Pluto anymore—the astronomers have now announced that it is no longer a true planet, but merely a dwarf. Below is the new introduction to our new edition of The Book of Pluto, where we keep some perspective on this celebrated non-issue.

New Introduction to The Book of Pluto

May 1995 feels like a long time ago. That is when The Book of Pluto first appeared. Due to some recent Pluto transits in my own life, the book disappeared for a while—perhaps fittingly, given Pluto’s predilection for disappearing into the Underworld.

I am happy to see it returning to the world’s visible surface. Not a word has changed in the text. Generally when I put the final period on a piece of writing, I’m not eager to go back and fuss with it anymore. Here, in this new foreword, I only want to do a couple of things. I want to address the issue of Pluto’s allegedly “not being a planet anymore.” The second is to offer thanks to a couple of people who’ve kept my work alive in a time when its very existence was threatened. The first is my manager, friend, and general Grand Druid, Tony Howard, for his terrific work as editor-in-chief of Seven Paws Press and in being the large brain behind our website, www.forrestastrology.com. The second is Carol Czeczot, who from her aerie in the mountains of North Carolina, fights a never-ending battle against my grammatical errors, faux facts, and bad syntax.

In 2006, eleven years after I had written The Book of Pluto,  the International Astronomical Union shook up our view of the solar system. They demoted Pluto to a “dwarf planet,” while elevating the asteroid Ceres to that status.

I still had Lord Pluto’s cell phone number, and when I informed him of this unseemly insult, he displayed his fabled sang froid. He only said that he intended to transit each of their Suns sometime over the next 248 years and that we should all be patient because vengeance is a dish best served cold. We need not fear the International Astronomical Union.

With that said, while I do have a few quibbles with the IAU, I personally believe that they are fundamentally correct in their decision. It is good astronomy. Pluto really is quite different from the rest of what have called “planets.” It is far smaller than our Moon. Its mass is only 1/25th that of the next-smallest planet, Mercury. For part of its orbit, it is actually closer to the Sun than Neptune. Pluto is a different beast, in other words. I have no major problem with the IAU decision to give it a different label—except that it upset a lot of astrologers, confused a lot of their clients, and kept my email Inbox overflowing for a few months..

Here is the heart of the matter. “Planet,” in reality, is a cultural word more than a scientific one. We astrologers, for example, have been calling the Sun and Moon “planets” all along. That’s because the ancient Greeks called planets aster planetes, which meant “wandering stars.” That was to distinguish them from the normal stars which remained neatly in their geometrical relationships to each other, forming stable constellations. So anything that moves along the Ecliptic was seen as “wandering,” and the word “planet” came to mean anything in the deep sky that was not a star.  For years that meant the Sun and the Moon, along with Mercury, Venus, Mars, Jupiter, and Saturn.

So, there is an obvious precedent for astrologers using the word “planet” differently than astronomers. We have been doing so all along. For that simple reason, I still call Pluto a planet in my work. I am not fighting with the International Astronomical Union. I don’t have a dog in that race. I am not an astronomer, I am an astrologer. And we astrologers know how powerful Pluto is astrologically. No experienced astrologer can doubt that. Most of us have scars to prove it. When I think of any astrologer feeling that he or she now has to stop calling Pluto a planet, I just shake my head in despair. I also wonder at such lack of faith in one’s own direct experience.

We should probably start taking Ceres more seriously. It is definitely rather spherical in shape, which was one of the three criteria the IAU came up with for defining a “planet.” (The other two criteria were that “it orbited a star” and that it had “cleared other bodies from its orbit.”) I have two technical quibbles with the International Astronomical Union’s definition of planet:

But, those quibbles aside, I think that the IAU did a pretty reasonable job of defining something that is mostly undefinable in any ultimately airtight way. Again, the real key to understanding all of this is that “planet” is a cultural word, not a reference to something we can  objectively differentiate from the rest of the stuff that orbits the Sun.

Here is a deeper perspective: Astrology 101 is that the solar system reflects the human mind. Astrology 102 is that, as our sense of the solar system has expanded over the centuries, so did our awareness of the human psyche. Witness the famous synchronicities around the discovery of Uranus, Neptune, and Pluto. (This is well-trodden astrological territory and I will not repeat it here. Suffice to say that as we discovered these three planets in the heavens, we were simultaneously discovering them in our own collective mind.) What’s happening now in the world of astronomy is truly amazing, and much more interesting than a juggling of definitions. Our whole paradigm of the solar system is shifting— which implies that there is some very interesting astrological work ahead for the next few generations! 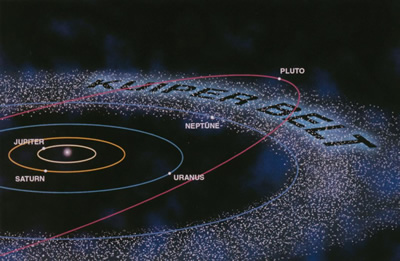 Out beyond Neptune, they are now discovering a whole new realm of mostly icy, planet-like objects. “Kuiper Belt Objects” is one technical term for them, although increasingly they seem to be called “Trans-Neptunian Objects, or TNOs. There are about 800 of them known now, and there are  likely thousands more awaiting discovery. They share many properties with Pluto. In fact, Pluto simply seems to be the closest and brightest of them—and that is the spark of necessity behind the International Astronomical Union’s anti-Pluto initiative. They realized that if Pluto were still to be called a planet, they would need to name about 800 more objects as planets too. What really blew it open was the discovery of Eris in 2005, which on the cover of TIME magazine was hailed as the tenth planet. Eris is slightly bigger than Pluto, with an orbit of half a millennium or so. It is clearly a planet, if Pluto is one.

In summer 2006, The Mountain Astrologer magazine published a cover article I wrote called, The New Solar System.”It was an attempt to lay a foundation on which astrologers could update their astronomical files to reflect the much more detailed “mirror in the sky” that the astronomers have provided for us. You can read it in its original form.

It’s good to be alive at a time when the real nature of the solar system is emerging from the fog!

In this class, Steven introduces thes prfound techniques of evolutionary astrology in the living context of the rectified natal chart of jazz great Louis Armstrong. Listeners will come away with a knowledge of the rudiments of an entirely new method of analysis. Recorded at UAC 2012. 1 hour 15min.

Based on Steven’s latest work, The Book of the Moon, this lecture introduces an eight-phase interpretation of the lunar cycle based on the Pagan calendar of solstices, equinoxes, and cross-quarter days. Recorded live at the post-conference workshop held UAC 2012. 3 hours 40 min.

Weak expressions of Mercury, Venus, and Mars correspond closely to the "three poisons" in Buddhism — Ignorance, Attachment, and Anger. Learn how to work consciously with the energies of these three "personal planets". Recorded at UAC 2012. mp3 format. 1 hour 15 min.