Venus turned retrograde on December 21st, right on the Winter Solstice. Those two pregnant moments coinciding is a rare event and it tells me that we should pay a lot of attention to the strong Venusian signature on the coming year.

Venus Through the 12 Signs Take a journey with Steven through Venus' expression through all twelve signs of the Zodiac. This talk is great for anyone wanting to learn a little more about the sign placement of their natal Venus. Also great for students who would like an introduction to the way Venus might express through each of the twelve signs.

On January 11, that retrograde Venus conjuncts the Sun at 21°12′ of Capricorn. It remains retrograde for the usual forty-day period, finally turning direct on the last day of January at 13°33′ Capricorn.

The Sun-Venus alignment on the 11th is called an “inferior conjunction.” Despite the term, there’s nothing wrong with it! “Inferior” here only means that Venus is directly between the Earth and the Sun. On the other side of its orbit, Venus again aligns with the Sun, but this time with the Sun between us and Venus. That’s the “superior” conjunction, and it is a very different beast. How can you tell the difference? Either way, it is the Sun and Venus in the same degree. But there is one critical distinction: at the inferior conjunction, Venus is always retrograde. At the superior conjunction, Venus’s motion is always direct.

The inferior conjunctions take place every 584 days, like clockwork. And that is the beginning of some real astrological magic and wonder, as you will soon see. 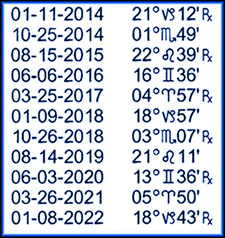 Check out this table on the left. It shows the successive conjunctions of the Sun and Venus over the next eight years. Notice that the next one occurs pretty soon – in October, in early Scorpio. But Venus is direct, not retrograde—and so we know that this is a superior conjunction, with Venus on the far side of the Sun. The next true inferior conjunction occurs on August 2015 at about 22° of Leo. The next one after that happens in October 2018 in about 3° of Scorpio. 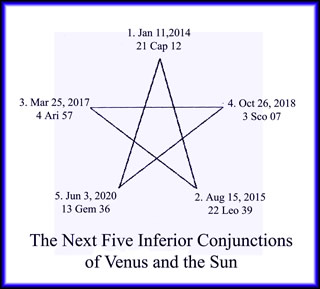 If you draw these successive inferior conjunctions on the circle of zodiac, an amazing pattern appears. It is a nearly perfect five-pointed star. You can see it here in the graphic on the right. With each inferior conjunction occurring 584 days after the previous one, the entire cycle of five of them takes almost exactly eight years to complete—7.997 years, to be exact. That is two days and eight hours short of eight years. Then the whole thing starts over again two or three degrees earlier in the zodiac. (The Venus pentagram completely retrogrades back to its starting point in 760 cycles, or about 1215 years.)

This is one of astrology’s wonders. It also helps us define a very important eight-year rhythm in our experience of relationship and of creativity. Next time you have trouble going to sleep at night, just start thinking about approximately eight-year intervals between significant intimate milestones in your life. Also look at multiples of eight years.

Venus went retrograde on the Winter Solstice, as we saw. The forty-day period of “backward Venus,” with the inferior conjunction at its center, is a time of reflection. Retrograde planets always convey some sense of looking into the past and learning from it. The planet is, after all, literally going back into degrees through which it has already passed. How often have you made a dumb mistake in an intimate situation—and then turned around and done exactly the same stupid thing a second time? These patterns are hard to break. What breaks them is consciousness and self-awareness. And there is no more fertile astrological period for that kind of growth and change than these forty magical days which, in this case, started on the Solstice and run through the end of January. The seeds you plant now—whether they are the seeds of breakthrough or the depressing seeds of deadening repetition—will be flowering in your life at the next inferior conjunction in August 2015. And over the next eight years you can build a beautiful five-pointed star of wisdom and grace in your own awareness, a little hologram of this beautiful celestial rhythm.

If you would like to learn more about Venus retrograde, a colleague of mine, Nick Dagan Best, is offering a webinar on the subject over the first weekend of January 2014. You can find out the details and register for his webinar at Astrology University. In this live webinar, Steven will focus on the meaning of planets that square the moon’s nodes. If you have a planet squaring the nodes, or want to learn more about interpreting this challenging signature in others’ charts, this webinar is for you.

Space is limited and this webinar will sell out, so register early to guarantee your spot.