I ate a jellyfish. I did it in order to redeem the dignity I had lost when I could not bring myself to eat a frog. Many of you have probably guessed already that I am talking about my recent trip to China. Mars was transiting over my 9th House Pluto when I left, so I was a little nervous about the trip. Also a very skilled Vedic astrologer had warned me of various dangers during that same period. I try not to be astro-paranoid, but I admit I was edgy. All in all, it felt like a dumb move to go to China under those kinds of astrological energies.

Something I really appreciate about my career as an astrologer is the way it lets me see the world. I like traveling and I am willing to go pretty much anywhere. When the opportunity to teach in Shanghai appeared, I was . . .interested. Not excited really. Like most Americans, I had internalized a lot of negativity about the People’s Republic and some fear as well. I imagined a nation of dutiful, uniformed “worker bees.” I envisioned myself followed everywhere by a government “minder.” I expected to find a nation full of people afraid to express any opinion that might trigger official reprisals. I anticipated drab, Brutalist communist architecture everywhere. I was careful to remove the words “Dalai Lama” from my vocabulary, and I imagined a nation in which any kind of spiritual practice would raise eyebrows. I even had some concern about being imprisoned – astrology had only recently emerged into legality there. And I imagined myself at dinner, being presented with plates of frogs and jellyfish.

The only thing I was right about was the frogs and jellyfish. Everything else about China gave all my prejudices the shock treatment – there, by the way, was the real meaning of Mars hitting my 9th house Pluto. It was time for me to stretch my horizons even if that scared me. The people I encountered in Shanghai were wonderfully warm and emotionally expressive. They were individualistic. They hug like Americans. They cry. They talk about their feelings. They are psychologically savvy. They are into personal growth.

I bet you can intuitively confirm all this just by looking at the faces in this photograph of my class. 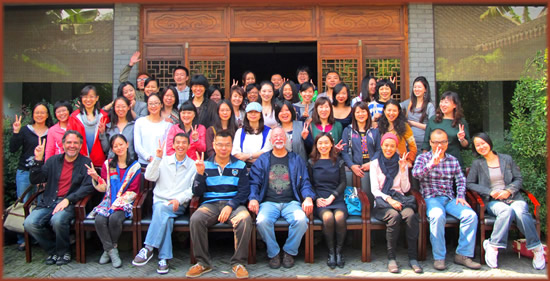 What about repression? What about their fear of being “disappeared” by their government? Well, many of the Chinese people I met complain about certain aspects of their government out loud in restaurants — they are not so frightened or repressed. But in general the feeling I got was that they simply have relatively more faith in their government than most of us in the west currently have in our own. And considering the enormous increase in prosperity to which their governmental policies have led them, there is of course a good reason for that faith. By the way, to call modern China “communist” makes about as much sense as calling Britney Spears a theoretical physicist. It is as capitalist as America, but with a lot more government participation in the larger businesses. And whatever your political beliefs are, it would be difficult to make the case that what China is doing is not working.

The government of China has a dreadful record in terms of human rights. I would never sweep that under the carpet. That is one of the reasons I was scared to go there. I am also, God knows, not claiming to have become some kind of China Expert after two weeks in the country. I know there’s a big difference between urban prosperity and rural poverty there now, and I never really got into the deep countryside. Nor did I get to any of the “minority” areas. But something is happening in China which I found inspiring. The place is changing rapidly. The social and political log-jams and stand-offs that are currently crippling the West are less visible in China.

Astrologically, the Chinese are also naturally affected by the tension generated by Pluto in Capricorn squaring Uranus in Aries, about which I wrote in the last newsletter and which are described in videos on this website. In the West, these pressures seem just to be building and building, with the repressive economic structures pitted against increasingly angry Uranian revolutionaries. Progress seems frozen. China has taken a significantly different road. The government is easing up control slowly and methodically, in a measured Capricornish way. Compromises are driving evolution there. Let me give you two examples.

First, as I mentioned earlier, astrology had been illegal until recently. Now “The Inner Sky” is about to be published in translation there – and already there are books available in Chinese by Liz Greene and Stephen Arroyo. The terrific Atlanta astrologer David Railey now lives part-time in Beijing, with a book out in Chinese and a large teaching practice. I am just using astrology as a barometer here. The same tide that has opened China to astrology has opened it to many other things. The change is happening in the collective mood, and the government is not opposing it. My Chinese friends all referred to this “opening,” and were excited about it. Many of them pointed to 2007 as the time when the winds began to shift, just as Pluto got to the end of Sagittarius.

Here’s another example: Facebook is barred from China. That is obviously a repressive policy. But the reality is that many Chinese people have Facebook pages. There’s widespread availability of software that allows people to get around the government ban. This is pure techno-Uranus vs repressive Pluto, of course – but in this case, the Plutonian government is not stopping the Uranian practice. They are turning a blind eye to it, the way a good parent might tolerate a teen coming home a little late. Again, there is a sense of a gradual easing of control. That’s a wise Capricorn response to the Uranian/Arian potential fury. They are finding a middle path.

The main point I am making here is that if we withdraw our negative projections from China, we in the West can learn a lot from it. They are getting some things right that we are getting wrong.

Meanwhile, China continues to learn enormously from America. Our films, fashions, music, and so forth are ubiquitous. And of course they are famous for taking our technological inventions, which we excel at creating, and then producing and marketing them with their incredibly effective partnership of government and industry.

Material prosperity alone does not feed the soul. That’s a commonplace observation. As as a country becomes accustomed to wealth, a hunger for something deeper arises. This is working out very precisely in China. The country is growing rich and simultaneously there is a burgeoning interest in anything that might give deeper meaning to life. As most of you know, the kind of astrology I practice is metaphysical, full of references to reincarnation and the evolution of the soul. When I was invited there to teach, I was nervous that no one in Shanghai would have any idea what I was talking about. I couldn’t have been more wrong. The class was tremendously enthusiastic and engaged. Their assumptions about life were the same as those of my audiences elsewhere n the world. 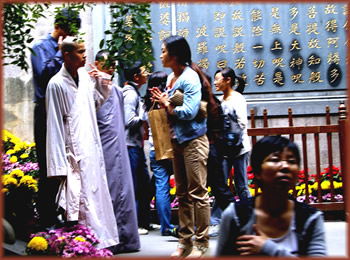 On a similar note, I also visited several Buddhist temples, and they were all crowded with Chinese people doing devotional practices. Buddhism may have been suppressed for a while, but emphatically it did not die in China. Just have a look at this photograph. It was taken at the Ling Yin monastery. The image of the young woman doing the “Namaste” to the monk is just eloquent to me in the way it speaks of the spiritual renewal happening in China today. Also take a look at those dark splotches on the Chinese characters on the wall – they are the stains of thousands of sweaty palms touching the Sutras for luck.

Personally, I practice Vajrayana Buddhism, the Buddhism of Tibet. So, like many others, I had a lot of “attitude” toward China about the bloody Tibetan invasion of 1950. As I became comfortable with the actual level of freedom of expression in modern China, I brought that delicate subject up with my new friends. I said what I believe straightforwardly, which is that it was wrong for China to invade Tibet. (I said it humbly, acknowledging that America’s track record of leaving other countries alone isn’t exactly spotless either.) The reactions were interesting. There was no argument against my position, but there was a sort of disconnect. As we spoke, I realized that the invasion happened long before most of my students there were born. Were I to harangue a 30 year old German about the evils of the Nazis, I suspect that person would agree – but if I went on too long about it, I would encounter pretty much the same look I saw in the eyes of my Chinese friends. To them, this is ancient history. Tibet is simply part of China now, and that is taken for granted in the same way that no American really thinks of the North Carolina mountains as Cherokee land anymore.

They seem fascinated with Tibet, positive and open about it. Many have visited there. One woman with whom I became friends lived there for ten years or so, and was actually close friends with the grand-daughter of the previous Dalai Lama. Another had had a long intimate relationship with a Lama.

And of course the Dalai Lama himself is not pushing for Tibetan independence, only for more autonomy.

Tibet is a complicated question. All I can say is that I came away with a more nuanced view. I was also quite aware of a crowning irony which is that had China not invaded Tibet, I probably would not have been blessed with the teachings of the various Rinpoches who have laid the foundation in me for the kind of astrology I practice. They would all still be in Tibet. 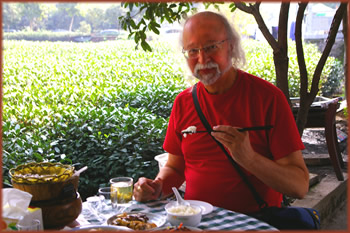 These are my impressions of modern China, which is distinctly not the China of even ten years ago. In this explosive Uranus/Pluto age, I feel it is essential that all conscious men and women strive to be wary of polarizations and projections. Neptunian compassion is going to show us the way forward from the war-mongering potentials of the Uranus-Pluto squares. It is not hard to find politicians who seem to hold the attitude that tension, even war ,with China is somehow inevitable. It isn’t! But bridges must be built. And I know that I myself arrived in Shanghai with a lot of toxic illusions about one in every six human beings on the planet. Bottom line, Mars challenged me to be courageous enough to face my own Plutonian projections, and perhaps to face the bitter task of admitting that I have been wrong.

I am now eager for my return to China, and I feel tremendously energized by the prospect of bringing evolutionary astrology there. “The Inner Sky” comes out in Chinese in November. I am excited to have a shot at making the principles of evolutionary astrology very much the ground floor of astrological practice in a country of 1.1 billion souls – a country which will have such an impact on the human future over the next hundred years or more.